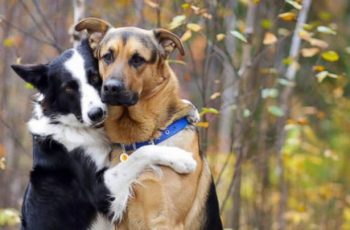 Two sweet dogs have become celebrities in their own right! Awesome vines of a Border Collie hugging a German Shepherd are making their rounds in the internet and have gone viral!

Lottie’s latest hug, which was posted on Vine last week, has been looped more than 35 million times!

“Lottie has a knack for doing tricks and she loves nothing more than performing for crowds,” Duguay told ABC Newsvia Facebook. “In my eyes, Lottie is a super dog.”

The proud dog owner shares that although Lottie is a pretty lovable dog who does lots of tricks like sledding, dock diving, and catching Frisbees, “she’s very much a normal dog.”

“Lottie isn’t perfect,” she says. “I’ll be the first to admit she’s like every other dog. She barks when someone comes to the door, she’s chewed a roll of paper towels and she likes spending her days taking naps.”