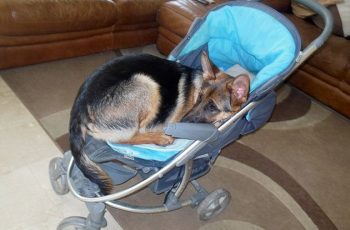 Karma began by stealing pacifiers from her owner’s grandson. She also regularly sleeps in the baby’s trolley and even feeds from milk bottles. The baby dog sleeps in a little onesie.

“She first started with dummies at three months-old, it was a little pink one that she pinched it from the side and just sat there suckling on it like a baby,” Iris said. “Whenever she gets a bottle she chews on it and then drinks the milk too, it’s pretty hilarious and we try not to let her do it too often.”

Iris found it initially funny when her pup started copying her two-year-old grandson, Kayden. But now, even after putting her in a playpen,Karma still manages to escape to play with her human best friend.

“Karma turned out to be so fully of energy she even escapes when I give her a time-out in the playpen meant for children,” she said. “Whenever she escapes she sneaks back to go and play with Kayden again, whenever she sees him she gets so excited it’s so sweet.”