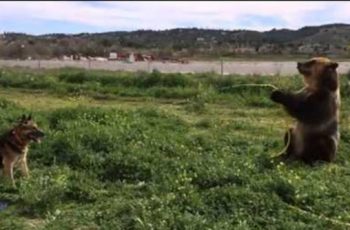 A German Shepherd and a brown bear are best friends!  What an unusual interspecies friendship!

Watch them play as the brown bear sprays her canine buddy with a hose!

While we think bears belong in the wild, Tima, with the help of her German Shepherd friend, seems to be doing okay!

The footage was, captured in Villacarrillo, Jaén, Spain. The 300kg brown bear, originally from Siberia, was adopted by a Russian circus artist in 1995 when he was just five months old.

The pair travel the world together, performing in shows and films.

The bears owner says Tima was very easy to train.

“He has amazing qualities, he loves to play, he never shows any aggression, he’s not greedy and he’s great friends with my dog. We are very fond and proud of him. He is a member of our family.”