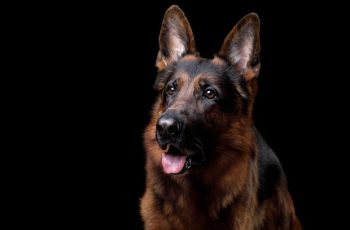 Jay Neitz at the University of California, Santa Barbara confirmed this. In a report published by Psychology Today, Neitz did different test trials to see in dogs do see in colors. In the study, dogs were shown three light panels in a row: two of the panels of the same color and a different colored one. The task of the dogs is to go to the panel with the different color and press it. If the dog presses the correct panel, a computer will deliver a treat reward to the cup below that correct panel. With the study, Neitz concluded that dogs do see colors but instead of seeing ROYGBIV, they would see it as very dark gray, dark yellow (brownish), light yellow, gray, light blue and dark blue. Meaning, the dogs see colors but only in yellow, blue and gray. Dogs see the colors green, yellow and orange as yellowish; violet and blue both look blue; and blue-green looks gray.

Do Dogs Distinguish Things According to Color or Brightness?

After the study that confirmed that dogs see colors, some researchers wanted to know more about how dogs really see the world. Scientists at the Institute for Information Transmission Problems of the Russia Academy of Sciences suspected that dogs distinguish levels of brightness to distinguish objects instead of color.

Contrary to what the scientist first suspected, majority of the dogs went for the color identifier instead of choosing the ones with the brightness identifier.